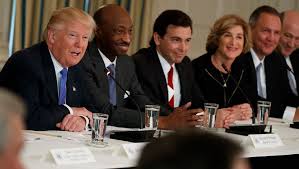 The White House Strategic Policy & Manufacturing  Councils have disbanded. Both Councils were set up by President Trump and the White House, for top level executives in the business spectrum, to bring forth and initiate ideas to help bring jobs to American workers.

Many CEOs of the Councils stepped down because of the handling of the situation that occurred in Charlottesville, Virginia on Saturday August 12, 2017. Many of the CEO were angered and bothered; on how the President confronted the situation via news conference; in which he waited a few days, to speak on the dire situation. The CEO’s felt uneasy and uncomfortable about how the President handled the racial tensions that occurred in Charlottesville, Virginia that weekend of August 12, 2017.

The Manufacturing & Strategic-Policy Councils were set up to assist and advise the President on job creation initiatives for working Americans, and to implement job creation policies in the United States.-SB