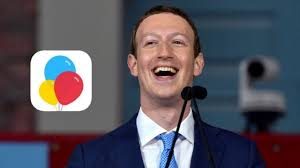 Facebook launched a photo sharing app in the beginning of 2017.  The social media giant wants to get in Asia’s biggest population.

Facebook, Twitter, Youtube, have been censored and/or blocked in China because the Chinese government believes these social media platforms can create disturbances, which can then lead to jeopardizing Chinese national security.

The app that Facebook created along with Youge Internet Technology, a Chinese based internet tech company; is called Colorful Balloons.