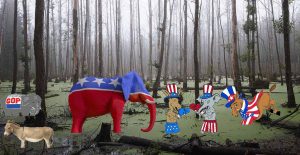 Why Trump is Failing to give the Millenniums what they most Want and Need  in a Functioning Government?

Facing a dismal future of low employment, an economic future far less promising than their parents and grandparents, millenniums the youth of America, have more reason than anyone else for a functioning government to address their problems. President Trump came into office with the promise to “Drain the Swamp!”, to make our government start functioning for the people instead of just for the self-proclaimed elitist of America.

But draining the swamp means draining out the stale, putrid, feted water to allow fresh water full of new life to flow in. And that means getting rid of all the present professional politicians and start getting qualified people in who can actually work and solve problems. There’s no use writing and passing legislation until you first address the problem with some rational thought instead of emotions or payback to outside groups you owe your office to.

America was warned about these feted waters of American politicians when on the day of his retirement, Speaker Tip O’Neill stood on the steps of the Capital and warned about those sound biters’, the new generation of politicians who were very skilled at using the news media for their political careers and very little else. And everything he tried to warn us about has come true.

President Trump is failing to drain the swamp, simply because he doesn’t recognize what must be done if America is ever to have a functioning government again. So how do you go about getting rid of those people who constitute. The Swamp’, to open the way for the caliber of people needed to address the problems millenniums face? The principle factor which Speaker O’Neill spoke of is the application of mass media and mass marketing technologies to our political system, and this in turn is where all the monies go into elections. When our founding fathers wrote America’s constitution, these technologies didn’t exist, so there was no need to include their consideration in the system of checks and balances required for a modern government to function. That deficiency needs to now be addressed, and the constitution provides the means to do that the amendment process. In order to mitigate the powers of mass marketing and mass media technologies on the functionality of our government we must restore the system of balance within. Four amendments are required to accomplish this vital goal:

1) The line item veto for the President, with provisions that any over ride would require a separate bill and vote for each line vetoed. No lumping vetoes together and then voting deemed having been passed tactics. The core objective is to get rid of vote buying.

2) Term limitations for congressmen and senators. Five total terms for congressmen giving a maximum of ten years and two terms for senators giving a total time of twelve years. With a presidential limit of eight years, this would give a good overlapping of terms. The goal is to get rid of the professional politicians and let men of proven success and abilities come forward to serve their nation with their demonstrated skills. Prevent entry of professional politicians who come and hold office for twenty, thirty, forty . . . even fifty years, and are only skilled at creating and maintaining images, and using the mass media to get elected instead of having any real problem solving abilities.

3) An amendment that would forbid anyone to participate in any election, in coin or in kind, for which they cannot qualify to vote in. Forbid outsiders participating in other people’s elections by bringing money and workers into an election when it’s not their election. The amendment would apply to any election of any public official . . . local, state or federal. This means that if the dog catcher in Dogpatch Arkansas is elected, then an activist actor in Hollywood can’t send a hundred dollar donation to a candidate nor can some activist from D.C. come in as a volunteer worker. If you can’t qualify to vote in an election, then you can’t participate in that election in any way, shape or manner . . . including anyone underage to vote. Includes provisions allowing federal, state or local statutes and the ability to prosecute violations.

4) The congress and senate to have the power to fire any federal employee by a simple majority vote. The vast federal bureaucracy has become the Eunuchs of the Forbidden City , no longer answering to or fearing the Congress, and therefore no longer controlled by the Congress. If either the house or senate can terminate the employment of any federal employee which wasn’t confirmed by the senate, by a simple bill of termination requiring only a simple majority and no presidential signature, then the bureaucracy will cease to be a power unto itself. Such a bill of termination could include specifications of re-employment with the federal government or denial of retirement or other benefits.

Presently, there is a growing movement to have a constitutional convention to reform our American government by amending the constitution to form a functioning government able to address the growing critical problems facing so many Americans. And the important thing is the future for the millenniums and Z-generation will be decided at such a convention, because the problem of technology displacement can’t be stopped. The only real solution is for Americans to advance technologically, and that’s unlikely to happen until the government has been restored, which can only be accomplished with these four constitutional amendments.

One thing is certain, the youth of America, the millenniums and Z-generation, have by far the most to lose from technological obsolescent and displacement of their generations. And until we have a functioning government until there is the means provided to truly drain the swamp, then little to nothing will be done to alleviate their plights. And the only way to accomplish this is to restructure the present government to restore the balance with the four above proposed constitution amendments to clear the way for a higher caliber of people to govern us.

Until the American government has been restored to functionality, none of the problems we now face can be addressed.