AMAZON CEO (JEFF BEZOS) BECOMES RICHEST MAN IN THE WORLD FOR HALF A DAY…. 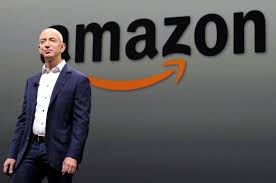 On Thursday July 27, 2017, Amazon head honcho/founder and CEO, Mr. Jeff Bezos surpassed Microsoft founder Bill Gates, as the richest person in the world, he toppled Mr. Gates with an estimated net worth of $90 billion.

Mr. Bezos and Amazon have had a productive year so far, having purchased Whole Foods, a middle eastern online retail giant Souq.com, and a host of other investments; such as the expansion of warehouses, streaming/content services, as well as marketing and promoting in house products such as the Echo Fire Stick. The Amazon brand remains a strong brand and even a more competitive household name. Successful contributions by an even more accomplished man.