Yo-Yo’s of Life: The Threads Of Technology Displacement In My Latest Novel And How The Problems Of The Millenniums Are Rooted Decades In The Past. 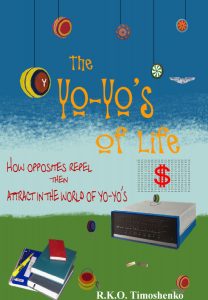 I just finished my fourth fictional novel under my pen name R.K.O. Timoshenko (all available on amazon.com) that is set in the mid 1970’s, when the roots of technology displacement of people was becoming prevalent. There are three characters, Heather who is a liberal arts major having been through a very abusive marriage and acrimonious divorce. Her landlord John, who is an engineer in the Air Force returning to the university to study electronics and computers, intent on joining the exploding computer revolution. And finally, the third main character, the MITS Altair 8800, the world’s first personal computer two years before the famous Apple II and TRS-80.

As a psychology major, Heather is very much an alien, or one who so fails to advance technologically that they become aliens in their homeland. She and John are about as opposite as people can be, plus having faulty perceptions of each other from their senior year together in highschool. But years later, circumstances bring them together as tenant and landlord while both attend university. In discussing the problems for women and the woman’s liberation movement with her teacher Gloria, Heather complains that the movement is geared to the professional woman, the upper 5% of the American woman population. That the movement seems to look down on woman working as secretaries and typist, which then comprised about one third the jobs that woman worked at. She then poses the question of what will the woman’s

movement do if these computer boys should invent a machine that replaces the secretary/typist thus eliminating a third of the jobs for woman, not realizing she has accurately forecasted the future for so many woman. That in just a few more months, the first wordprocessor program for small computers would appear, and with the explosive growth of low cost personal computers, all those jobs would disappear in a decade. That in less than ten years, the US Department of Labor would announce they were drastically reducing their career forecast for secretary/typist because of the unforseen impact of new technologies – the word processor with low cost computers.

The computer boys had indeed replaced one third of the jobs for American women.

And as is so often the case, the ‘Gloria’s’ have no answers. But this is just one example of jobs being eliminate by low cost computers, for in the factories, robots where becoming more prevalent and so were also eliminating many of those good paying manufacturing jobs for the men. I recently saw a news article about a California manufacture of high end flashlights, the factory owner complaining that since he had to use two parts made in China, he couldn’t put “Made in America” on the label, which was the point of the news report. But they showed pictures of the factory, which employed about 300 people, and it was huge! It looked like about three aircraft hangers set end to end, and as far as you could see, there was line after line of green metal cabinets. Little industrial sheet metal houses … where the machine robots lives! There was only one or two humans walking the aisles and cross walkways. It’s a factory, like so many other American factories, where most of the 0employees0 are machines.

It’s been that way across the spectrum of both manufacturing and business in general, and this process continues today, changing the world and future for the millenniums because automation and technology displacement is now on the middle and upper income white collar workers. Since the economic crash in 2007, there has been numenius news reports of middle and upper level management in the six figures income, who have been laid off. Where once they could find new jobs in a few days to weeks, they have gone months, even years without a nibble. And in those reports, the people express confusion why they can’t find new jobs. This is the result of another artifact of technology displacement called “Organizational Innovation” as described in the new book “Race Against the Machine” 1 where advancements in communications and computers have allowed corporations to reorganize themselves to do the work with fewer skilled management people.

Automation and technology displacement is no longer some poor sod working down on the factory floor, for that’s now all done and past tense. It’s now the higher level, higher paid workers who are the targets of automation.

It was just by happenstance that the woman character Heather foretold what would happen to so many women, and how the woman’s movement, which she supported, would have little effect on improving the station of woman in American society simple because it did not recognize and address the growing problem of technology displacement for both men and woman. You can’t solve problems by ignoring major components of a problem.

In the book, computers are used to show the pronounced gulf between ‘Heather the alien’ and

‘John the technologist’, which is the bases for their conflict and incompatibility. They are going in different directions in life, with Heather trying to understand just what this incompatibility really is, while John is absorbed in understanding and enjoying the emerging digital electronics technology. But despite their fundamental differences, living close together intertwines their lives more and more, until slowly they become one as a married couple.

While this story is set in 1975-6, it continues unabated today for the millenniums as they struggle for a future of their own.