What I’m Telling the Kiddis: Advice for the Youth of America in a New World and Economy 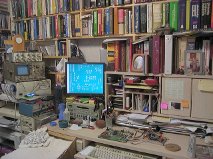 You may wonder what advice to America’s youth has to do with economics and finance.  Quite simply, any change to the environment will have some effect on the nation’s economy, and my advice goes to the heart of that change.  The explosive growth of technology, and what can be done with automation, is changing the environment at an ever increasing amount.  The great tragedy I see unfolding today is the middle, highschool and college students are preparing themselves for the world of their parents and my generation.  A world that no loner exists!

That’s why I tell kids that the true measure of an education is the ability to understand the world you live in, and in the twenty-first century, that means having the sciences and mathematics.  If you don’t have the mathematics and sciences, then you don’t have an education, no matter how much paper you have to hang on the wall, or how prestigious it is.  More comes from mastering science and math than a mastery of specialized knowledge, for one gains the intellectual skills of rational thinking, analysis, problem solving, planning and organizing.  Right now, half the graduates of science and engineering majors never work a day in their fields of study.  Not that they don’t get jobs . . . they do, for these are the people that corporations know they need to survive and prosper in the twenty-first century.

I tell them to forget about what is written on that degree, that once they are out in the work force, they will be surprised, if not shocked, how many people are working at something different from what is written on their degree.  They need to take as much mathematics and science that they can, but also they need to take as stiff a curriculum as they can possibly choke down.  Your college program is more than just acquiring knowledge . . . you’re also proving yourself.  Just like a little African boy who must go out with a couple three spears and a shield to single handedly kill a lion or tiger, to prove himself a man, a warrior and be accepted by his people, so must today’s youth.  Although most students don’t realize it, that’s exactly what they are doing with their college work.  Now if they go out and kill the neighbor’s cat (philosophy , education, history, counseling, ect.), then no one is going to think much of them.  You have to kill the lion, the tiger or such.  You don’t prove anything with a mickey-mouse program.

You continually see this with the 20% plus unemployed or underemployed for new college graduates.  In one recent year, Texas universities graduated 5,000 psychology majors, but there was only ten psychology based jobs available.  For years I have witnessed new graduates with weak degrees going out into the job market only to find they have nothing marketable, who then elect to return to the universities and pursue the law.  The market for lawyers is now so saturated that only 20% to 50% of new graduates can actually find a job as a lawyer.  For instance, the sister of the movie actress Sandra Bullock is a lawyer, but manages a restaurant in Austin.  In my youth, that was a job for highschool graduates

For my generation (started college 1967), the average American changed career fields three times over their lifetime.  For today’s youth I can easily seeing them having to change five, six even seven or more times during their working lifetime.  In order for them to successfully do this, they need the strong foundation that comes from those math and science course, and those who don’t have that foundation will find it more and more difficult not to be abandoned and left behind.  Technology displacement is no longer some poor slob standing on a factory production line waiting to be replaced by a machine.  That’s past tense and already largely done.  Looking at news stories during this recession, there have been a number of six figure income people who have been laid off.  Where once they could have a new job in a few days to a few weeks, they have gone months, even years with little prospects.  Just Google these three words . . . IBM, Watson and Jeopardy . . . you’ll find a revolution in artificial intelligence, and it’s already commercially available for practicing medicine.

Several years ago we were visiting my sister-in-law, and happened to be watching the national news when there was an announcement that one of the large hi-tech corporations was laying off 5,000, 15,000 or something like that people.  My sister-in-law exclaimed, “Why do they do that?  They’ll just have to hire them back!  Who’s going to do the work!!”, and I explained that with modern computer and communications technology, the remaining workers will do the work.  That not only can they do the work, but most likely will do it better, faster and more efficiently.  That all those jobs were gone forever, and more importantly, as technology continues to advance, this will happen again and again over the economy and the business environment.  Today, the question isn’t about getting a job after graduating, it’s about getting jobs for the next forty to fifty years as technology continues to advance and displace working people.

As in the past, advancements of technology has forced higher and higher levels of educations, consequently the whole fabric of our economy is continually changing.  You only have to look at the second half of the nineteenth century, and each quarter of the twentieth century to see this, with each quarter significantly changed from the previous one.  Not only does today’s business find the market different, but as technology continues to displace people, they will increasingly be left to support an ever expanding burden of obsolete people unable to make contributions to society.  If left to continue as-is, this burden will continue to weigh down the economy, pulling it and business down just as with English socialism in the fifties and sixties where business and the educated abandoned England for other countries.  It was called the Great Brain Drain of Britain.

The world is moving forward, advancing technologically every day, and those who fail to advance, for what ever reason, get dropped off and left behind.