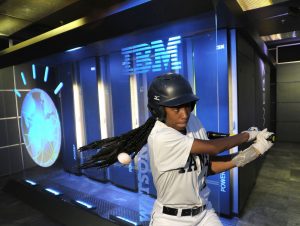 Today, when you say ‘technology displacement of people’, everyone thinks of the poor little old factory worker standing on the assembly line. Some machine is brought in, the down trodden worker is handed a pink slip, pointed to the door and told, “Don’t let the door hit you in the butt when you leave!” But this is the displacement when I was a millennium … many decades ago. This is the image most Americans still have of technology displacement. When the 2008 recession started, you may have noticed a number of news stories about professional people, corporate middle management making six figure incomes, who got laid off. Where once, they could have a new job in just days, or a few weeks, they had gone months even years without any offers. They were no longer needed, simply because those who remained working were now able to do the jobs of those laid off because of technology. In other words, those laid off had been displaced by technology just as factory workers had been decades before.

Images of factory workers being laid off when a new machine is brought in to do their jobs, persist as how technology displacement works. In reality, there are three ways or methods which people are displaced by technology, and they are:

1) Direct Displacement – The traditional technology displacement that everyone always think of, where a machine is brought in that directly replaces an individual, often several people. The classic example is the machinist, those workers who created the industrial revolution, who made modern America. These people were replaced, rather quickly I might add, by robot machine tools that not only did the work of highly skilled machinist, but did it faster, more accurate and much better all around. Not only did these robot machines take over the highly skilled and much sought after jobs of machinist, but they allowed the extensive migration of manufacturing

from America. Those skills once so required by manufacturing were no longer needed, making machinist obsolete.

2) Oblique Displacement – The second means of displacement is by a technology allowing one person to do the work once done by many. Using a machine, if one person can do the work once done by ten, then those remaining nine people are out of work, and so therefore are no longer needed. A 90% reduction of the work force. An example is draftsmen, those skilled workers who create and maintain the engineering drawings needed to define a product for manufacture … or for building your new house. These drawings were once done using drawing boards, T-squares, pencils, scales, dividers, compass and triangles. Just like an artist does, the draftsman would draw an image on paper of some part or thing, which was scaled so someone could make that part without error. This was a highly skilled occupation which took considerable time to correctly create such drawings, and even more time to make changes as a design evolved. But using a computer and CAD (Computer Aided Design) software, a draftsman could not only make drawings faster, but much more accurately, more accurate than a part could actually be made. A draftsman did the work of many traditional draftsmen using pencil and paper.

3) Indirect Displacement – The third method is where technologies displaces a number of people who have the intellectual ability to do the work of an unrelated career field. While not as clearly identified as the first two methods, especially the technologies doing the displacement, it has had a profound effect across the American economy. For years technologies have been displacing young people, especially new college graduates, who find limited job prospects for their field of studies. They have returned to universities to acquire a law degree, then pass the bar to become lawyers. These process has so glutted the job market for lawyers, that now between 20 and 50% of new lawyers are unable to find employment as lawyers. While there is no machine that has directly replace lawyers, they are nevertheless being displaced indirectly by a number of technologies

I just finished reading an interesting book, “The Second Machine Age” (1) which described how technologies displaces people by allowing reorganization of businesses so fewer people are needed. This is a form of oblique displacement, and explains why those corporate middle managers, making six figure incomes, got laid off. No machines or technologies were developed to deliberately replace them, it was just a consequence of a number of technologies. However, this is changing too, with a new artificial intelligence technology called Watson. If you Google three words … IBM, Watson and Jeopardy you will find a recent revolution in artificial intelligence, a machine named Watson that went against the two very top winners of the quiz program Jeopardy and beat the pants off them. The AI technology is now available to the commercial and medical communities, including television ads promoting sales of these systems. H & R block is now using this technology to prepare income tax returns.

The reality of today’s kids, the millenniums, is they are getting the worst deal since the Indians sold Manhattan for twenty-four dollars.

Our school systems have completely failed to provide the education necessary for the twenty-first century, continuing to prepare America’s youth for my world, the mid twentieth

century, a world already faded away and gone. They now live in a world which every few years, they must reformulate themselves for a new job … a new career field, and those who can’t are left behind. Therefore, the only real answer to technology displacement is education– the real education of the math and sciences which gives an individual the solid foundation to be able to continually reformulate themselves to continue a career.

No doubt, today’s youth are facing an uphill battle if they are to have any economic or financial future.