The Dinosaurs Demise and Our Economy: Does the Disparity in the Job Market Foretell Economy Demise? 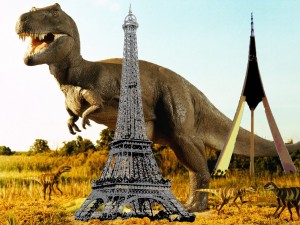 I just got this months issue of Scientific American, which has a very interesting article by Stephen Brusatte on “What Killed the Dinosaurs” 1, that considers that the demise of the dinosaurs was a result of the weakening of the environment prior to the cataclysmic asteroid strike. That because of the diminished disparity of the herbivores prior the meteor, the dinosaurs were weaken to the point of being unable to survive the consequences. In addition to amazing me what they are doing in paleontology research, it got me to wondering if the same thing isn’t happening to us and our modern economy.

Like you, I had no idea just what the word “disparity” really met with regards to dinosaurs, the general definition being “a great difference”. In this context, disparity is the anatomical measure of biodiversity, the greater the number of different species, the greater the disparity. The article made the point that prior to the impact of the killer asteroid several major groups of dinosaur herbivores had disappeared. The disparity of dinosaurs had significantly diminished, meaning there were now fewer species of dinosaurs and a lower level of biodiversity. In turn, this lower level of disparity made the dinosaurs, as a whole, more fragile and therefore more susceptible to any cataclysmic event. In short— the dinosaurs were probably already on the way out when the asteroid hit! For an ecosystem, the lower the disparity, the lower its resilience to cataclysmic events … the more fragile or brittle that ecosystem is.

An interesting article, if you’re a junior amateur paleontologies, which I’m really not. So whatdoes all this have to do with economic and financial matters, and more importantly, why is this article even on this website? Well, quite simply, while perusing through the article, I began wondering if the same applies to an economic system. If job types or career fields is equivalent to species, then does an economic system have disparity too?

A structure with many elements or members is more resilient than one with just a few members holding up a structure, for if one of those member fails, then the whole structure is more likely to collapse. For example, with a tripod structure, destruction of one of the three legs will almost certainly cause the tower to collapse, while a structure such as the Eiffel Tower has a lattice of structural members making it a distributed structure. Destruction of several of these individual members will not cause the tower to fall, indeed the destruction of several dozen members probably would still not topple it. The same principle of 0redundance of components0 is the bases for the invention of the internet. The military wanted a communications system able to survive a nuclear war and this was accomplished by having a lattice mesh network of communications paths where messages could find their way across from sender to receiver. If a nuclear exchange should destroy the bulk of those nodes, there would still be enough left for messages to find their way across the network.

In an economy with a wide variety of career fields people have a choices of where to go if their present job disappears. For my generation, the average American changed career fields three times over their life time. For the millenniums I can easily see them changing five, six or even seven times, at a time when the number of career fields is drastically diminishing. The millenniums have fewer and fewer options as the structure of the economy goes from a distributed structure to single member structure– that would be the economic disparity! The diversity of the job market diminishes so the people have fewer and fewer options left open to them.

So from this view point, I can see that there is disparity in an economic system, and furthermore, the inherent dangers associated with diminishing disparity. As technology displaces people they have fewer options for new jobs to go to, and often as not, those options that are available are lower paying – lower quality jobs. This is particularly true for the millenniums where so many are starting at the bottom tiers of the economy with little prospect of moving upwards like their parents and grandparents did, despite having a college degree. This in turn, means a shrinking market of young with disposable income, that in turn is very important for our present hyper-consumerism based economy. The new consumers we are depending on to continue supporting and growing the present economy is diminishing before our eyes. And more importantly, there’s the question: will those youth be content to be bypassed and just left behind?

Now the premise of Stephen Brusatte’s article is the decreased disparity of the dinosaurs so weaken the species, that with a cataclysmic event of an asteroid impact, they were unable to weather the disaster and became extinct. We have already seen the devastating effects of a cataclysmic event with the sudden spike in oil prices in 2007, when world oil consumption exceed what was physically possible to be pump out of the ground. And we saw (continue to see) the effect of economic disparity as people’s lives were disrupted while they struggled to find a new job, often any job, in a world with fewer career fields available to them.

And now the sixty four thousand dollar question! Has diminished economic disparity left the world economies so weaken that another cataclysmic event could again destroy the 0dinosaurs0 of present economies leaving the field wide open for new species of mammals to burst forth and become the new dominate economies of the world.

Only time will tell … and time always tells.