The Changing World For Millennials: The New Axiom Of Modern America 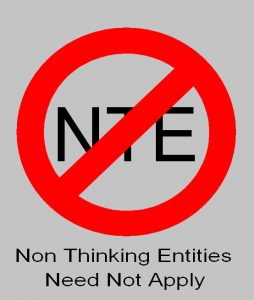 Today, half the science major graduates and half the engineering graduates never work in the field of their studies. It’s not that they can’t find jobs, for they certainly do . . . and they are much sought after by American business. This is because studies of the sciences and engineering give people more than just technical knowledge- it gives them the intellectual skills of analysis, organization and problem solving that companies realize they must have if they are to survive and prosper in the twenty-first century. Consequently, more and more there is the ‘invisible’ sign to the right, hung out by companies looking for new people to build their business on. Unknowingly, unwittingly companies are seeking out people with the intellectual skills that come from university studies in the sciences and engineering. By the same token, they are avoiding those from the traditional liberal arts curriculums.

When I was first starting out, getting a college degree, any college degree was your ticket to the good life. You could expect to get a good well paying job. That changed rather quickly, actually in something like just a decade. As manufacturing in America declined, as computers became more prevalent in the economy, jobs for college graduates began to shrink. Companies started becoming more selective, and those with the least rigorous degrees began finding jobs difficult to find, and paying little more than minimum. This is a result from the decline in the creation of new jobs as the turn of the century approached, until by the start of the twentieth-first century, creation of new jobs reached zero where it remains to this day. Before the 2008 economy crash, the unemployment-underemployment for new college graduates was about 9%.

Since then, it jumped to and remains at about 20 to 25%. New college graduates now hold low paying jobs once held by highschool dropouts, while at the same time are also struggling to pay off student loans.

For the last several centuries, technology has doubled every fifteen years (computers, medical and genetics as little as three to five years), consequently technology has grown immensely and continues at an unbelievable rate. Lets consider the rate of growth for technology in 1855 when many of the technologies that make up our modern world were coming into being. If technology had grown at that 1855 rate, a constant even rate year after year (linear growth), then it be almost the year 30,000 AD to reach the level of technology we have today. Looking the other way, it’s about 6,000 years back to the stone age. That’s how huge the technology gap is for most Americans. Today, so many American’s are closer to the stone age than to today’s technology and the world they are living in. That’s how far so many Americans are behind. With the liberal arts degrees little different from a century ago, it’s easy to see why companies feel they need the engineering and science graduates if they are to survive in the twenty-first century. They know they must have people trained for this century, not the century when the Declaration of Independence was signed.

This is why, unknowingly, not really realizing it, so many American companies have hung that invisible sign of ‘NTE’s need not apply’ on their front door. While BA college graduates still can go in, still fill out job applications, still leave off resumes, and still strive to gain a decent job to make a living at, they have already been rejected the same as if that NTE sign was very large and acutely visible for all the world to see.

And there is absolutely no indication that it will ever improve!

One of the great tragedies I see being acted out today, is so many of today’s young people are preparing themselves for the world of their parents . . . a world that has already faded away and died. A world that no longer exists, leaving them with little to nothing.

Consequently, the ideal career path for a millennial or Z-generation person is to take as stiff a degree program in science or engineering that they can possible choke down, then get an MBA (Masters of Business Administration) from as good a school as they can get in. That’s the ticket to success in American business, the ticket that the youth of America needs to build a good solid, well paying career that can end in a retirement. This is what more and more young people are doing, thereby leaving less opportunity for those who don’t.

Getting a job that can end in the pot of gold at the end of the rainbow!