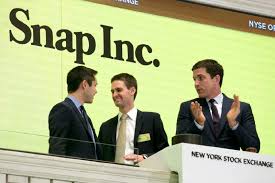 Snap Inc (Snapchat) opened and closed today on the tech boards. It was one of the few Tech IPO’s that successfully launched in 2017, thus far.  Analysts had placed the valuation of Snapchat @ $24 share, and it skyrocketed closing 44% higher then when it started. It beat expectations closing above the $24/share prediction by observers.

Snapchat is trading under the ticker symbol SNAP on the NYSE.  The market capitalization of Snapchat is around $33 billion dollars, noted by analysts and researchers alike.