Siren Song of “Mommy will take care of you.” : Another Resurrection of Socialism to Answer the Impact of Technology Displacement on Today’s Economy and the Millenniums 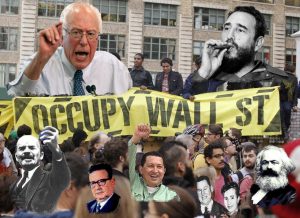 One surprise of the sixteen election has been the way the youth of America, the millenniums, are suddenly responding to Bernie Sanders advocating socialism, simply because the Occupy Wall Streeters of September 2011 didn’t. As the Occupy movement gained momentum and supporters, advocates of socialism stepped forward to promote the same tired worn out philosophy that in the western world has become a synonym for failure and non-performance. But there was little support among the students for socialism, and much to the surprise of those advocates, they quickly found themselves talking to just themselves. And then Bernie Sanders comes along, a

lifelong and dedicated socialist, who magically starts drawing student supporters to the cause like a Pied Piper, and so suddenly socialism is again considered a viable political philosophy in America.

This is despite the long and sordid history of socialism’s failures, as well as communism, in delivering on their promises. Granted, this is largely due to youth’s lack of historical perspective, of not yet having the experience of life that tells them this is a bogus philosophy. They are not aware of British socialism in the sixties and seventies, with Britain’s Great Brain Drain problem when her intellectual assets (scientists, engineers, musicians, economist, … etc. ) fled the country to avoid the high taxes and floundering British economy brought on by the political philosophy of socialism. Just one prominent failure among many failures including the Communist Soviet Union and China (Communism is just socialism under a hard repressive totalitarian power which forbids any objections or actions to undo socialism). Nevertheless, today there is the socialist Venezuela mess, which right now is imploding before the eyes of the world on TV news, not to mention the economic troubles of Greece, Italy and Spain all from their socialist programs.

It’s easy to see why millenniums are drawn to the promises of Bernie Sanders as they face more and more under and unemployment (20 to 25% for recent college graduates), as they face the

overwhelming problems of obsolescence and the coming realization that there’s no future for them in the twenty-first century. For when people are hard pressed by the realities of their environment, especially when individuals have little to no control over their lives, it’s hard not to succumb to the siren song of “Mommy will take care of you.” For that’s the foundation of socialism– that Mommy will take care of you, if you will just quietly sit down and let the government take control of your lives … that is, don’t complain or resist.

Today, a technologically advance people are displacing a lesser one, and those lesser ones are coming from the folds of the millenniums. The youth of today are being played for chumps! It’s the politicians playing on the natural desire of people to ‘vote’ themselves success and prosperity. It’s much easier and a lot more fun to march in demonstrations and do political activism than struggle through a calculus or physics course to prepare yourself to be an asset for a technologically advance society. The political debate of the sixteen election is: Businesses is doing fine, but not so for many people, things are getting better for some, while worst for many others. For people, especially the young, when they are faced with difficult problems, it’s a comforting thought that a “mommy like” figure will step in and take care of you, just as your real mommy did with all those little hurts encountered in childhood. But it’s a siren song heard many times before which has yet to pan out. Their proposed programs really just constitutes a reservation- an artificial environment for warehousing unwanted and unneeded people, in this case the millenniums who have failed to advance sufficiently to make substantive contributions to the world’s most technologically advance society. Just like the Native Americans of the nineteenth century, the government ponders just what to do with these kids, but doesn’t have any real viable ideas about what to do with them.

The only real political debate for today should be the problem of obsolete people and what to do with them, as public schools, colleges and universities continue to pump out a flood of obsolete people. Millenniums will continue to be an increasing burden for society, dragging America’s economy down, instead of being a beneficial asset to America’s economy. Until this problem is successfully addressed, all other debates are meaningless nonsense. So in our time, which history will most likely come to call the “Age of the great pretenders”, where none of those who govern us seems to have a clue what needs to be done … how will America cope with this growing mass of obsolete people?

In other words– just how do we fix this problem?

Well first and foremost, we must get a functioning government. Until you have a functioning government, you can’t do or accomplish anything! And that means getting capable people, who are less backwards and behind than those who are now charged with leading us into the twenty-first century, to be elected to government service. Only then will it be possible to reverse the economic chasm so many of the millenniums are sliding into.

And will the time ever come when the political philosophy of socialism is finally laid to rest to remain buried and forgotten so as not to give false hopes to those of desperate economic stations in life.