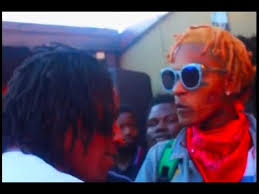 Just got off the phone with manager’s of  RICO RECKLEZZ (Chicago King Dave) & KYYNGG (Hotel). We were on a conference call, both bosses of the talented artists, spoke to each other as MEN & AS BOSSES DO…Resolving any issue that may have been presented online via respective online media sources and outlets…..

There is NO BEEF, NO HOSTILITIES, NOR ANY ILL WILL amongst KYYNGG & RICO RECKLEZZ; as a matter fact both may work or collab on something HUGE (*Donald Trump voice*) in the future……

Both managers of (Rico Recklezz & Kyyngg) exchanged phone #s & pleasantries, and something good may be brewing between both artists, maybe COLLAB, TOUR…. MAJOR $$$$$$ I envision.

Both artists Rico & Kyyngg know their value to the hip hop game and the massive following that both have online….

When it’s Economical and Financial, Economic & Finance Report is on it first.

Will Soon have interviews with RICO RECKLEZZ on the EFR Podcast

& the KYYNGG interview is on soundcloud now, link below….

Alright, Signing OFF This