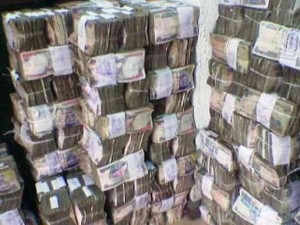 In Abuja, six central bank  officials and sixteen central bank staff have been charged with currency fraud, and theft in Africa’s biggest economy, Nigeria.  The officials and staffers are said to be charged with currency manipulation valued @ $40 million dollars USD.  The EFCC (Economic and Financial Crime Commission) is the oversight body handling the charges in Nigeria.

The charges against the central bank employees and officials come within days after President Muhammadu Buhari was inaugurated as Nigeria’s democratically elected leader. Further investigation into the fraud within the Federal Reserve Central Bank has been called by the current central bank governor, Mr. Godwin Emefiele.  Currently Nigeria is in debt because of the slumping oil revenue that has stagnated growth in the country. -SB