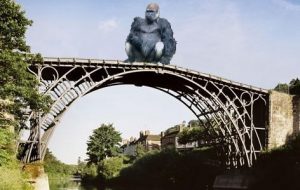 Since Hillary Clinton’s attempt to reform the health care system with insurance reforms, through Obamacare and now our present debates to again reform health insurance, there has always been a ‘one ton gorilla’ silently sitting in the middle of all these political debates and machinations. A massive gorilla that’s always been present, sitting quietly right square in the middle of it, dominating the whole national debate, but no one ever admits to its presences let alone considering its impact on the problem. And that two thousand pound gorilla is the growing problem of obsolete people in the midst of our economy!

Since the start of my engineering career in the seventies, I have witnessed one career field or class of jobs after another disappear to new technology. And while these people have mostly gone on to find new jobs, inevitably they are lower paying jobs because lower skills are required. Anytime you reduce the skill-intellectual requirements of a job you reduce your cost of labor simply because more people are able to do that job. This displacement by technology has created a growing class of Americans who are obsolete and therefore less able to make substantive contributions to society as reflected by their lower pay scales. The principle problem of these proposed health insurance programs for America is the growing abundance of people unable to afford health insurance simply because they have so very little to contribute to society. Because they are obsolete, they no longer have the ability to make contributions and therefore have little to no money. That’s the two thousand pound gorilla in the room. The preponderance of obsolete people is the gorilla weighting down, indeed crushing any and all efforts to provide access to health care to all Americans.

The structure of a bridge provides a perfect analogy, since it must support more than what’s crossing over it. It must also support the weight of itself, the weight of the structural members

OK, so what’s the point? Like a bridge, the bulk of working people support the working force by paying for infrastructure, government services such as police and schools, maintenance of public works, public communication networks (roads, waterways, air ways) … any and all parts of supporting a modern society. That means each is making money to pay a part for that support, while those who are too far behind, who have few to no skills needed in the twenty-first century, are unable to pay anything, so they’re the one ton gorilla sitting on the bridge being supported by the rest. But like the supporting members of the bridge, the bulk of the support workers provide goes to support the workers themselves with just a little left over to support the gorilla. Many people think that each individual worker is in turn able to support one of the unfortunate ones who are unable to make substantive contributions to society. This bridge analogy shows why this assumption is so invalid, because it isn’t a ‘one for one’ relationship … most of the bridge structure goes to holding up the bridge itself, not the gorilla.

But worst yet, obsolescence of people means the gorilla is made larger (heavier) by subtracting from those who are supporting the bridge and hence the gorilla. As the gorilla grows heavier, the bridge grows weaker and therefore less able to support the load on it. The burning of a candle at both ends! Eventually, just like a real bridge, it is no longer able to support the load and collapses. This is not some abstract intellectual exercise for debating in pubs and cocktail parties, we are seeing it now in Greece, Turkey, Italy, Spain … we’re seeing it now in Venezuela where the collapse of the socialist economy has people killing and eating their cats and dogs!

Social Security is a prime example of the many supporting the few. When first passed, there were a little over 16 workers to support each elderly recipient, while today it’s 2.6 supporters per recipient. And more and more of these supporters are the millenniums, at a time when fewer and fewer of them are able to support just themselves. The structure of the bridge is eroding while the gorilla continues to grow!

Principle factor in the health care problem is people are not advancing technologically, and therefore are less able to make substantive contributions to society. This is reflected in the people’s inability to pay for their heath care. This is the one ton gorilla that everyone is ignoring in the calculus of health care as well as other aspects of social problems. Right now, one side advocates extensive government control of the health system to resolve the mirid of problems, while the other side advocates the free markets to resolve those problems, with neither considering any aspect of the obsolete people who are the actual forcing function of these problems.

And as it stands now, it’s the millenniums and Z-generation who are will to be the fall guys for