CHINA LOOKING TO REFORM AFTER GROWING TIT 4 TAT WITH U.S. 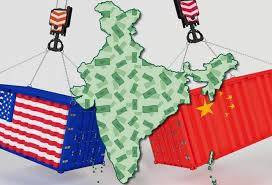 Talks among U.S. and Chinese officials did not amount to any agreement last month (August 2018), but talks seem to be ongoing while many experts believe nothing may come to fruition from the trade talks.

The United States believes it is gaining on the trade war against China, as Chinese economy contracts and their financial markets slow down. -SB