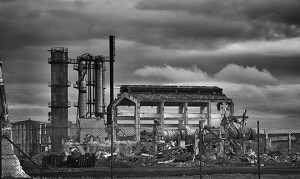 Candidates are promising the American electorate, that they will restore the middle class of America, by returning manufacturing with its multitude of jobs A return to the glory days for workers after World War II. Of course, they make no mention just how they intend to do this, no indication they have the necessary understanding of the problem needed to accomplish this. If queried why manufacturing left America in the first place, they will most certainly answer with the well know myth that cheap foreign labor drew all those good jobs away to foreign shores, leaving millions of Americans with poor prospects for their futures. Another example of how very little real understanding our leadership has of the world they live in. So if you have a desire to truly understand a significant component of the American economy, and are willing to take a few minutes to read (not skim) through this, then hold on tight, cause here we go! One of the great Allied secret weapons of WWII was a branch of mathematics called operations research. These analytic techniques allowed the Allies to optimize their weapons and strategies, thereby reducing demands on manufacturing and resources, an all too important factor in modern warfare. For example, if you are bombing a submerging U-boat, what is the optimum spacing to drop your depth charges to maximize you chances of destroying it?

One young officer made his bones doing operations research for the Army Air Force, then went on to Ford Motor Co., and later brought these analytic methods to the Pentagon. His name was Robert McNamara. The value of operations research so well demonstrated, business schools started teaching it to all those returning veterans with their GI bills. In turn, these graduates, with these new skills, went off into American business, which after the war, was mainly manufacturing. Time marched on, with those business graduates working their way up corporate ladders, so by the early sixties, they had risen to positions of influence. They were then able to apply their analytical skills of operations research to the manufacturing operations of their businesses. Prior to that, manufacturing had been judged by its gross profit margin, that is, the difference between monies going into the process, verse monies coming out. The classic black box, where the expenses where subtracted from the revenue. By this simple method, manufacturing had gross profit margins competitive with other American business, so board of directors thought they were doing just fine. In actuality, manufacturing is really a circulating chain of money, both in assets and cash, with a time value of that money (interest that could be earned). Manufacturing is a high capitalization endeavor (as well as farming/ranching), so when this chain of money was accounted for, they found that they were getting only 5%, 3%, 1½% . . . or even ½% return on their money (investment). They found that manufacturing really wasn’t that good an investment or rather a way to make money.

Now knowing what a rotten business techniques to develop strategies to break that circulating chain of money, and maximize how much cash could be pull out to reinvest in higher paying endeavors. Then they went to their board of directors and showed them how little money they were actually making, as well as a plan to stop that manufacturing, pull out as much money as possible, to reinvest in the high returns of the new shopping centers, strip centers, franchised restaurants and stores& in other words, the emerging hyper consumerism economy. First in trickles, then in streams, the money flowed out of manufacturing, until the economic shocks of the 1973 oil crises started the rust belt crumbling, and a flood of money left manufacturing. With the problems exposed by the rust belt, Washington decided the solution was the new service economy (hyper consumerism) and so heartily encourage businesses to abandon manufacturing, and an economy based on creating real material wealth, to one dependent on the economic multiplier effect of circulating money. Never mind that modern wars are fought and won . . . or lost in the factories. This is why the North defeated the South. (For our middle east military operations, we’ve had to purchase such basics as small arms ammunition from foreign countries.) Manufacturing left America not because of cheap foreign labor, but because it’s a poor way to make money. It takes a lot of money to start a manufacturing operation (high capitalization), and in return you make less money than if you invested in something else. It’s the same for farming and ranching. The demise of the small family farm was for the same reason– a low return on a large capital investment. Cheap labor was available in the southern states, but manufacturing didn’t migrate there. This is because traditional manufacturing requires a large pool of highly skill labor, the machinists to do the actual manufacturing. This is why manufacturing remained centered principally in the north eastern United States, but at the same time business was abandoning manufacturing, robot machinists were coming into being. The required skill level was dropping drastically, so foreign investors no longer needed that large pool of skilled labor. They could now build manufacturing plants in far away foreign countries using that very cheap and unskilled labor, with robots to replace those high paying skilled people. No matter how much cheaper their labor, until they had the robot technology, they couldn’t build manufacturing businesses.

American ex manufacturers were not concerned about all this, they just wanted out of manufacture, to make oodles of money outside the realm of factories. Needless to say, any claims by any candidates, of how they intend to bring manufacturing and jobs back to America are completely bogus. They have absolutely no power over the forces determining such actions and decisions. And even if they do manage to bring back some amount of manufacturing, the robot technology has continued advancing at a breakneck speed, so most of those jobs would be low end, low paying jobs that anyone without any skill or education can do. The one thing that really bothers me, is that no one seems to be aware of the true reason for the demise of manufacturing . . . most crucially, those who we elect to govern us. And this gives us a window into why so many problems of America go unanswered, for how can one possibly address problems without first having some real understanding of that problem? They can’t!

Conclusion! These promises to restore the vigor of America’s economy are just nonsense, for you can’t control that which you have no real understanding of.