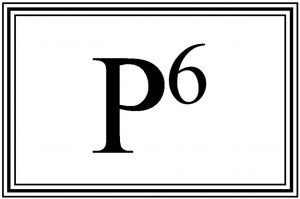 The term P to the Sixth means P6, or six P’s. Put simply, these six P’s stand for Pre Planning Prevents Piss Poor Performance’! This is another way of saying, If you don’t want things to result in a big mess, you had better think things through first!’ This is an extraordinary principle that our government has a phenomenal inability to do when governing us, especially the legislative branch. The result  continual, chronic nonperformance! The real complaint of the Tea Party movement, which they never really articulated to the people. The reason why so many Americans are furious is they keep electing these representatives, but nothing is ever done to address the problems they face of jobs and economy. And why the millenniums and children are facing such a bleak future with far less opportunities than their parents and grandparents.

Put simply, the P6 Law means thinking! Thinking things through, studying a problem, identifying the mechanics of a system, identifying the forcing functions (forces acting on a system), where these forces are moving or causing changes to occur, how they are interacting, and what the result will be. But instead of any real thinking, there’s just talk, talk, talk. Nothing resembling real problem solving such as we see in engineering, but rather talking  debating, as if all the world was one giant political debate, that if you win the word game’, then all the problems people face daily will suddenly be fixed. Our whole political process is absorbed in the machinations of getting elected, with virtually no consideration over what is really driving a problem. That driving force that must be address with real solutions if the problem is ever to be resolved. A juvenile attitude that if you can just out talk’ everyone else, if you can win the debates by clever fencing with words, defeat all your opponent by verbally out maneuvering them, then everything will be alright that the problem will magically disappear.

Like a herd of ducks wandering about their pond Quack, QUACK, QUACK!

And surprise, surprise! Problems never get fixed! If the automotive technicians, the mechanics who repair our cars, used the same problem solving techniques that Congress, the President and the Fourth Estate uses, half the cars would now be parked unable to run. A broken down car in America would never, ever get repaired again!! The owner’s only option being to go buy a new car!

The health care debate is a prime example. In the attempts to bring heath care to all Americans, clear back with Hillary Clinton’s proposals for universal heath care at the start of Bill Clinton’s presidency, through Obama up to the present debate with Trump’s proposal, no one has asked the fundamental question of why the government must provide heath care to everyone. No one has asked the basic question, “What forces are at work that leaves so many American’s without health care?” If pushed for an answer, they simply reply, “Oh, because they don’t make enough money!”, never really going any further to understand why so many people don’t have enough money. That goes directly to the heart of the problem. There are so many people who can’t make the money because there are so many obsolete people in American society. For decades, technology has increasingly displaced American workers, either directly or by reducing skill and intellectual requirements so unskilled labor could do the job for much less. More and more Americans have become surplus to the real needs of society, and hence not having the resources for such things as health care. The real forcing function of the health care problem is obsolescence of people’, the increasing displacement of people by new technologies.

With the displacement problem not being addressed, the number of people unable to care for themselves is growing with no end in sight. Left to the present problem solving skills of those who govern us, the problem and cost will continue to grow, making an increasing burden on society and the economy. It only stands to reason, there will come a time when this is unsustainable. The present attempts to care for the displace obsolete people is really just creating a reservation (an artificial environment for warehousing people), and historically the use of reservations has always presented a multitude of problems very serious problems. What happened to the American Indians is what typically happens to a primitive people caught up in a technological society.

By violating the P to the Sixth Law, the Republican’s are just replacing the Democrat’s so called Obama Care with what now looks more and more like the same thing, simply because they too are ignoring the forcing functions which are driving the problem obsolete people. In not working the problem, they are left with the same problem solving methods used by the Democrats they are left with pretending and imaging, the smoke and mirrors of American politics. And again more chronic nonperformance by our elected officials. The attitude of if we can just win the debate, then the problem is fixed!’ All it takes is winning, none of that mysterious thinking and understanding a problem stuff, just ignore the P to the Sixth Law and Quack, QUACK, QUACK!

And who is paying for all those Senators and Congressmen to have a wonderful time being important hotshots and big shots, drawing down good monies with salary and speaking fees, while pretending to fix our problems? America’s youth and millenniums that’s who! Paying by having their future slip away to leave them with far less than their parents and grandparents. Speaking as an engineer, a professional problem solver, you cannot solve problems, any problem, by pretending, creating and maintaining images on the media.

On the day of his retirement, Speaker Tim O’Neil stood on the steps of the Capital and warned about the new generation of politicians, those sound biters’ who were very skilled at using the news media for their political careers and very little else. And everything he tried to warn us about has come true.

When you violate the P to the Sixth Law’, you condemn yourself to failure.