The Problems Millennials are Facing 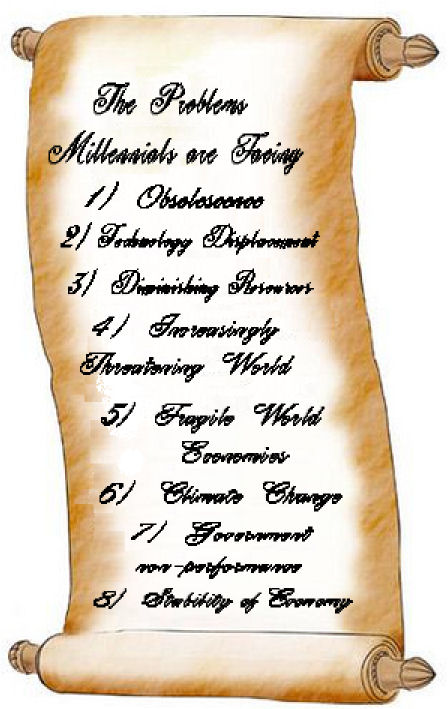 A list of the problems the Millennials and Z-Generation are now facing in their future.

The youth of America, the millennials and Z-Generation, are now facing a number of serious problems that are shaping their lives and future, both near and far term.  Here is a short list of the most profound and critical problems they are facing:

1) Obsolescence Technology is growing exponentially, doubling every fifteen years.  Most Americans are failing to advance, that is, most have gone no further than the nineteenth century.  Therefore, more and more Americans are unable to make substantive contributions to society.

2) Technology Displacement Going hand in hand with Obsolescence is displacement by technology.  The replacement of humans by machines and technology, leaving people with minimal to no jobs.  Each passing day, more of America’s youth are not needed, not wanted, not having any real value to society.

3) Diminishing Resources The availability of resources such as natural minerals and resources, water, energy, oil . . . in particular the oil, and negative resources of pollution and trash is a continual source of problems for young Americans, both for shortages in domestic America and world competition to obtain and hold those resources.

4) Increasingly Threatening World With the end of the cold war, many felt that world peace was finally at hand, but increasingly there are threats of war across the world.  The Middle East, China and the Pacific Rim, Russia and the adjacent Eastern European countries, all are tender boxes where armed conflict can erupt. In these modern times, wars are no longer isolated affairs, instead ripples reach out across the world to affect other nations at least economically.

5) Fragile World Economies Much to the consternation of many Americans, young and old, America’s economy is tightly coupled with other country’s economies across the world, friend and foe. And it’s been this way since the start of the twentieth century, having become increasingly more interdependent.  The economies of countries such as Italy, Spain, Greece, Portugal and China are prime examples of countries with fragile economies, where sever economic problems or collapse will have profound impact on many other countries including the United States.

6) Climate Change There is a lot of daily debate about global warming and climate change, much of it revolving around people’s aversions to the high technology world they are trying to live in.  What the scientist are saying in Scientific American and Science News is that yes, there probably is climate change, the extent and effects unknown, and yes human activity may be a factor, but how much is unknown.  As with so many problems, there is a false perception of climate change being a political problem.  It’s a political problem if and only if, the legislative process has significant control over the forces driving the problem.  Climate change is a result of massive over population of a species- and that’s US . . . the 7.5 billion humans now living. The political systems does not have any real control over the most important forcing function of this problem.

7) Government Nonperformance As with any other organization, the larger the organization becomes, the more sluggish and non-responsive it becomes. This very much holds true for governments . . . Federal, state and local. Nonperformance translates into not addressing problems faced by the people. You seldom hear any government people talking about things like technology displacement and obsolescence of people, indeed they are usually very careful to avoid the topics. Yet, these and other subjects are having a very profound effect on the future of most Americans, and the younger they are, the more likely a detrimental impact to their lives.

8) Stability of American Economy Probably the most important and critical factor for the young people of America is how stable the economy remains.  The near collapse of the world’s economies in 2008 shows how susceptible people of all economic strata, are to the stability of economies.  Anytime there are upheavals in the business world, then fissures and holes open up which allows technology to flow into the economy creating obsolete people and their displacement by technology.

There are other lesser problems on this list, but those listed above are most profoundly effecting the greatest number of people, and will most likely aversely impact the future of the millennials and Z-Generation.  While Obsolescence and Technology Displacement are at the top of the list, which they rightly should be, both are interleaved with all the other problems to some extent.  One factor that is greatly hindering any real progress in addressing these problems, is the assumption that all problems are a political problem which can be addressed with the techniques of political activism.  You see that with the global warming problem, where advocates are using the techniques of political activism, such as public education, spots on news stories to cultivate public opinion, countering any challenges in public debate, campaigning for political support and meeting with political leaders to garner their support. All fine and well, but as pointed out in item 6, Climate Change, the principle driving force of the problem is massive over population, and the political process has no real effective control over that.

And this highlights the real problem for millennials and the Z-generation, and that’s the poor education and problem solving skills of so may who are involved with the above list.  Failing to first identify the forces acting on a system shows a near complete lack of real problem solving skills, thus ensuring failure of any attempts to address problems.  And that’s really where the young of America stand today . . . a number of very serious problems which is detrimental to their generation . . . and no one able to really address any of those problems.