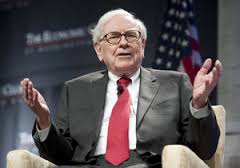 Mr. Warren Buffet, Chairman & CEO of investment conglomerate Berkshire Hathaway, is bullish on the American economy and its future. According to the mathematics of the future of American society, Mr. Buffet is “green” on the potential of America as it comes to jobs and the economy. In his case he believes the numbers add up significantly.

Since 2009 the US has seen positive employment numbers average over 2% annually.  Dating back from 2007-2009 the US was in the longest recession economically, since the Great Depression in the 1920s.  Mr. Buffet believes though problems remain on the economical and financial front (Economic & Finance Report, of course lol) there American people have been very resilient and effective sorting through the problem by enabling viable solutions and alternatives, which always embodied American culture. -SB