THE ECONOMY & FINANCIAL MARKETS WILL DETERMINE THE NEXT PRESIDENT OF THE UNITED STATES!!!!! 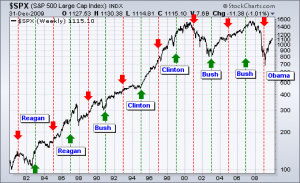 The financial markets and the economy will determine the outcome of the 2016 Presidential election. In previous US presidential cycles; when the economy and the global financial markets align the incumbant either is reelected or their party is reelected for another four year term. If the economy and the markets take a nose dive then the opposition which in this case is the Republican party, will come into prominent power in the executive branch.

However, the outcome turns out at the end; we definitely know that economic and financial factors were involved to determine the eventual outcome. -SB

Pres. Biden Will Be Choosing A Federal Reserve Chair Before Thanksgiving….

Pres. Biden Will Be Choosing A Federal Reserve Chair Before Thanksgiving….