Steven Mnuchin Is CONSIDERED TO BE NEXT US TREASURY SECRETARY!!!!!!!!!! 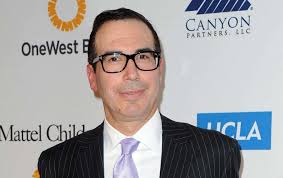 Mr. Mnuchin was Donald Trump’s national campaign chairman. He handled the majority of the finances coming into the campaign and exiting the campaign, also being dispersed to the Republican National Finance Committee; money would be distributed to Republican candidates around the country.

Mr. Mnuchin has years of experience in finance; being apart of the group that bought the federal government’s INDYMAC. Mnuchin’s group bought the former loan house, made it profitable and sold it for a tremendous profit. The group led by Mr. Mnuchin sold IndyMac for over $3.7 billion dollars. -SB