Judge Ketanji Brown Jackson Confirmed As The Next US Supreme Court Justice….. 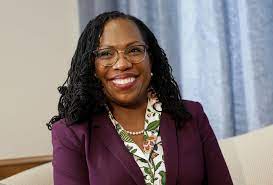 The Senate’s bipartisan support helped Judge Jackson get confirmed with a 53-47 vote, in her favor. Vice President Kamala Harris presided over the historic confirmation vote. Madam Harris, having historically being also represented as the first African & Indian American woman to hold the second highest electoral office in the land (USA). Ms. Jackson will be the first African American woman seated on the highest judicial court in the land, the US Supreme Court. An extraordinary achievement, that very few are able to attain in the judiciary complex. Judge Jackson who is a federal judge on the Court of Appeals in Washington DC, will preside on various national cases (of importance), once Justice Breyer retires this upcoming summer 2022 (in June or July 2022).

Ms. Jackson background is that she was raised in Miami-Dade County, Florida and she came from the segregated south. It must have been a vibrant moment watching their daughter be confirmed to the US Supreme Court, the highest court in the United States of America. Judge Jackson’s family was in attendance to watch this historic day take precedent. This was a monumental day indeed, for the nation and the world to galvanize and see. A day that shall be remembered for generations and also used to educate all ethnicities and backgrounds moving forward.

Many young African- American, minority, and girls alike will remember this day as inspirational and motivational and they will remember to “persevere” toward their own journeys, in order get to their final destinations. -SB